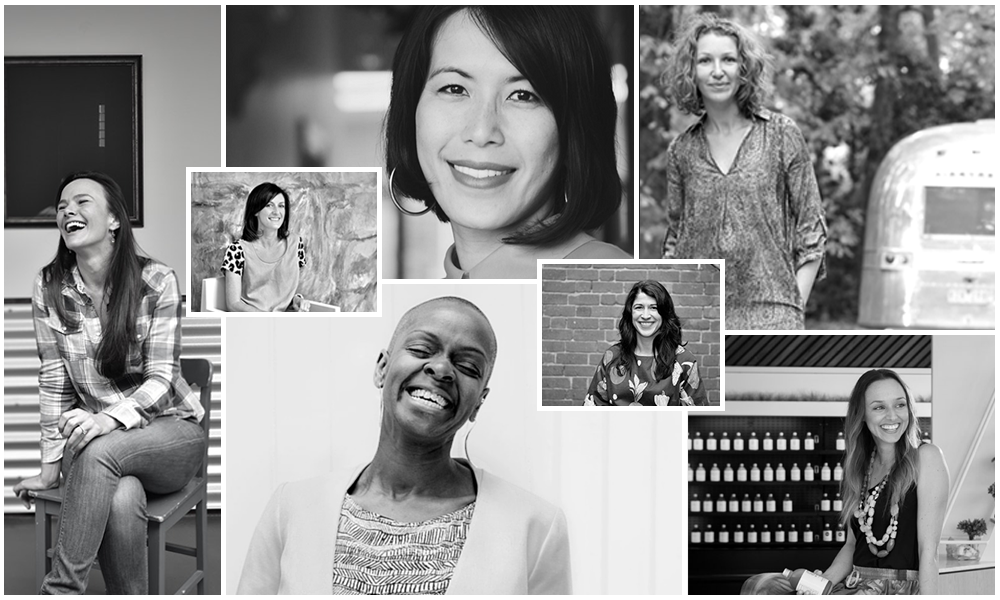 I’ve interviewed around 100 people who’ve taken courageous leaps in their lives and from the very beginning I’ve been interested in understanding how people move through fear and discomfort, choose courage and take a leap.

What I’ve learned from female entrepreneurs is that there is no one way to leap, but there are common threads that tie all leapers together.

1. There is no leap without belief

“It wasn’t who I knew, or what I knew that mattered the most. What mattered was what I believed in and was willing to throw myself into.” – Correne Wilkie

Correne Wilkie was one of the first women I interviewed in this series – and to this day, I still get goosebumps when I hear her story.

Correne was about to start a job in a big Melbourne advertising agency that she had been negotiating with for months. On the eve of her first day, she went to see her friend Felix’s band play their third show where Felix asked her for some help with the band’s marketing. The next day Correne called the agency, told them something else had come up, drove to Felix’s house, and offered to work unpaid for three months to see where they could take it.

That band was The Cat Empire and Correne is still their manager.

Correne had no money and no knowledge, connections or networks in the music industry. She wasn’t following the standard rules. But she believed wholeheartedly in the band’s talent, energy and future and she believed in her ability to make it work. Belief will take you to places you never knew were possible. It’s the starting foundation for any leap.

So, let me ask you, what do you believe in?

Serial leapers know the value of investing in oneself. They’re curious about life and all it has to offer.

Fern White is a dentist and owner of Beacon Cove Dental. Before buying her practice, Fern was offered a lucrative partnership in a corporate dental business with all of the trimmings. However, she realised that in order for the partnership to work, she would need to abandon her values and her own holistic approach to medicine and health. Instead she borrowed half a million dollars to buy a small dental practice that allowed her to be creative in treating patients in a truly authentic way.

Having never owned her own business or been a boss before, she focused on learning and personal development.

“I invested in growing myself and hired a business and personal coach to help me along the way. I knew that my business would reflect me and I wanted that me to be inspirational!” – Fern White

Beacon Cove Dental is now a successful dental practice with a loyal clientele and growing presence. Fern continues her commitment to learning and improving her business, built on her values and beliefs.

3. It’s not selfish to leap

Not all women who leap struggle with a sense of guilt, but many do. I believe that’s a reflection of the gendered experiences of women. We’re brought up to be caretakers, to consider the needs of others before our own. Taking a leap can be very confronting when grappling with those unconscious expectations.

Kemi Nekvapil was a successful actor living in London. In her words, she was living the ‘dream life’, but also felt completely disconnected from it. It took her 18 months to leave that industry.

“I felt guilty, ungrateful and selfish, and this kept me going to auditions and ‘living the dream’.” – Kemi Nekvapil

Kemi did take the leap, because she knew, deep down, she had to in order to live life on her terms. She is now a life coach and founder of Raw Beauty Queen. Recognising that sense of guilt for what it is, and understanding that it’s not selfish to choose to live a life that gives you connection and joy, is key. For all the women out there who are afraid to prioritise their desires – know that it’s not an absence of gratitude to go after the things you want, but a surplus of gratitude for what life can offer.

4. Self-doubt is part of the journey

I don’t think anyone who has ever taken a leap hasn’t questioned that process, paused at the decision, or thought, who the hell am I to do this?

Self-doubt, like fear and courage, is part of the process. I learned this from Sonia Lear – co-founder of Happy Camper Van, a vintage Airstream turned pizza food truck that she and her husband created.

Sonia reminded me that we’re surrounded by others who have faced, or are facing, similar challenges. Dreaming, and leaping, can be contagious. If we look to other people living their dreams, it reminds us that we have the ability to do so too.

“Change is scary. Every time I’ve taken a leap from a secure job or tackled the unknown, it’s led to bucket loads of self-doubt, and criticism from my family right at the moment I need their support.

I think the key to dealing with that is to surround yourself with inspiring people so you can push through all the darkness and not spiral into depression. For me as a woman, it’s other women living their dreams.” – Sonia Lear

5. Courage is a muscle and leaping builds it

It takes guts to leap. Courage is the act of doing something while being afraid. There’s no courage without fear and there’s no leaping without courage. Every leap story I come across confirms this, but one in particular comes to mind.

Jane Martino is the kind of incredible human who makes me want to get out of bed at 5:30am and take over the world. She has taken multiple leaps in her life. At age 25 she founded her company Undertow Media, which she then sold to co-found the mindfulness meditation app Smiling Mind (and later founded micro-donation app Shout for Good).

“A large amount of ‘the shift’ in mental state, energy and opportunity will never come while you are ‘getting ready’ for the leap. The whole point of leaping is not to have the safety net.” – Jane Martino

The more you leap, the more courage you get.

6. You don’t need to know it all to take a leap

Sometimes we read success stories about people who built businesses, taking wild leaps into the unknown, and it can seem as if those people had it all figured out right from the get go. It’s hard to imagine them ever questioning how to begin.

But not all leaps begin with a plan.

Natalie Warner is a corporate lawyer turned organic juice alchemist. She loved her job and her career, but after moving to an apartment on Greene Street in New York City with her husband when he took a secondment, the idea for Greene Street Juice was born.

Back in Melbourne, she started the business by buying a cold pressed juicer, sourcing organic vegetables, testing and blending original flavours herself.

“You don’t need to know it all, have a particular business qualification or experience or ‘have it all’ to start a business. You will do what it takes when the pull of desire and passion is enough. It’s hard to describe the feeling, it’s like an inner calling that you can’t ignore and it overrides the fear of the obstacles and challenges.” – Natalie Warner

Let go of thinking you need to know everything and everyone to take a leap. You can figure it out along the way.

7. A support team is required

Leaping does not come without its challenges. It can be a rollercoaster of emotion and there are times when you might want to throw in the towel or hide under a blanket for a week. What gets us through these moments is the support team we have around us – the people we call on for advice, a hug, or to simply lend an ear.

Nellie Kerrison, founder of Relish Mama cooking school, is the perfect example. Before Relish Mama existed, Nellie sent out an email to a small group of close family and friends, sharing her dream of teaching people to cook. Within seconds her sister had responded with ‘I’ll be there and I am so proud of you’, and within minutes her first cooking class had sold out.

“I was overwhelmed with both relief and happiness. The nerves had left me, and I felt surrounded by love and support. I was more than proud that I was true to our family motto – It’s just 20 seconds of embarrassing courage and 20 seconds of bravery. This moment of courage and bravery changed my life.” – Nellie Kerrison

A leap can take many forms – it might be a jump forward, side step, backflip or loop-de-loop. But a leap always requires courage and it always leads to growth. Because of this, there is no such thing as a failed leap, because every leap teaches us something and connects us deeper with our heart’s desires.

To those who have a question niggling away, or a leap building within, I say, go for it! Follow your curiosity. Start with little leaps in the direction you want to go and build your way forward, one hop at a time. Fill your life with courageous choices rather than regrets of chances not taken. While it might feel uncomfortable, there is no growth without challenge. You will never regret being brave with your life.

“Leap on, and choose courage over comfort, always.” – Kylie Lewis

Kylie Lewis is an executive coach, facilitator, podcaster and author.

She’s written the The Leap Stories blog series and book about people who have taken courageous career leaps.

Find out more at ofkin.com.